As oil crashed through $35 a barrel in New York, some producers were already living with the reality of much lower prices.

A mix of Mexican crudes is already valued at less than $28, an 11-year low, according to data compiled by Bloomberg. Iraq is offering its heaviest variety of oil to buyers in Asia for about $25. In western Canada, some producers are selling for less than $22 a barrel, said Bloomberg.

“More than one-third of the global oil production is not economical at these prices," Ehsan Ul-Haq, senior consultant at KBC Advanced Technologies Plc, said by e-mail. “Canadian oil producers could have difficulty in covering their operational costs." 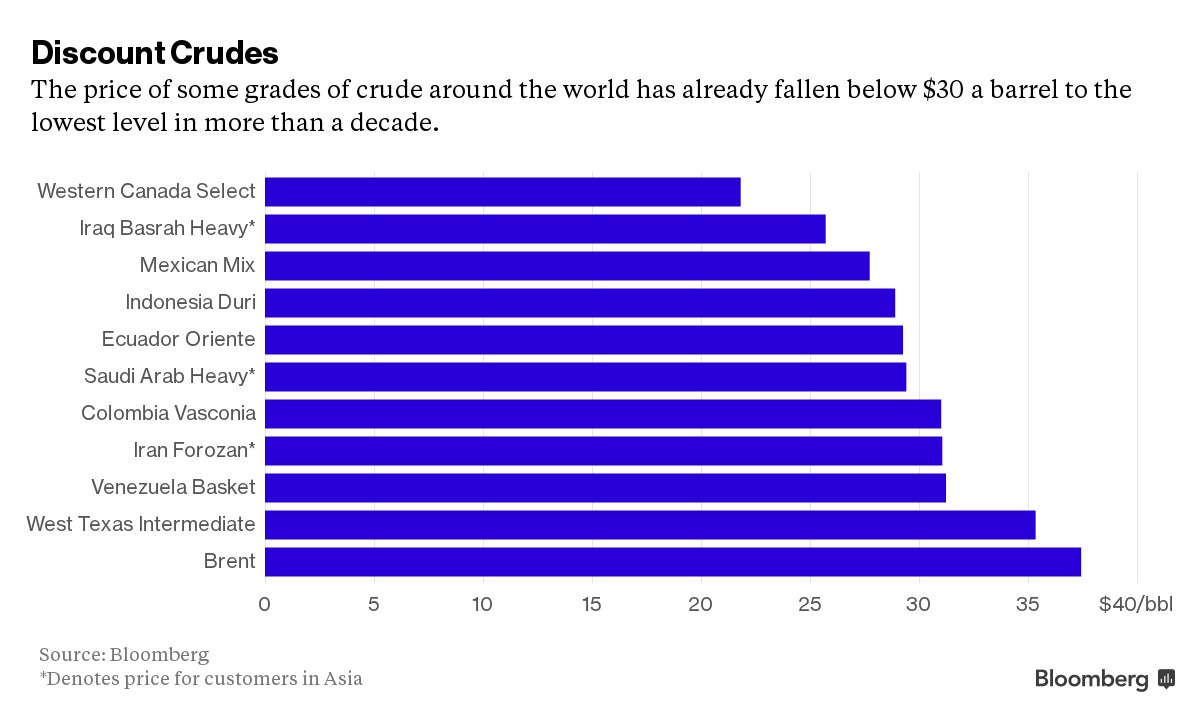 Oil has slumped to levels last seen in the global financial crisis in 2009 amid a global supply glut. While the prices of benchmarks West Texas Intermediate and Brent hover in the $30s, they represent a category of crude -- light and low in sulfur -- that is more highly valued because it's easier to refine. Some producers of thicker, blacker and more sulfurous varieties have suffered heavier losses and are already living in the $20s.

A blend of Mexican crude has plunged 73 percent in 18 months to $27.74 on Dec. 11, its lowest level since 2004, according to data compiled by Bloomberg. Venezuela is experiencing similar lows. Western Canada Select, which is heavy and sulfurous, has slumped 75 percent to $21.37, the least in almost eight years. Other varieties including Ecuador's Oriente, Saudi Arabia's Arab Heavy and Iraq's Basrah Heavy were selling below $30, the data show.

Bitumen -- which technically isn't crude but a heavy black viscous oil that constitutes the so-called tar sands along with clay, sand and water -- is trading at around $13 a barrel, suffering a drop of more than 80 percent since June 2014.

Crudes of this type trade at a discount to lighter varieties because to process them “refiners have to invest in upgrading facilities such as coking plants, which are very expensive," KBC's Ul-Haq said.