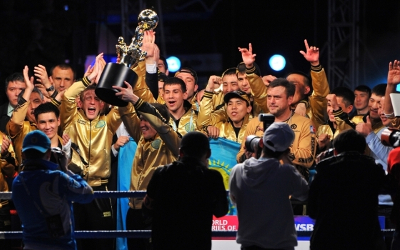 Astana Arlans Kazakhstan claimed their second World Series of Boxing (WSB) Championship with a 6-4 aggregate win against Cuba Domadores in the Season V Finals, Inside The Games reports.

With the two sides tied at 2-2 in the second leg following a 3-2 win for Kazakhstan in the first, super heavyweight Ivan Dychko secured the decisive victory at the National Tennis Centre in Astana by beating Cuba's Yohandi Toirac in the final bout of the tie.

The second leg began with a blistering flyweight battle between Kazakhstan's Olzhas Sattibayev and Cuba's Yosbany Veitia. Cuban champion Veitia was undefeated in the competition heading into the contest, and was the overwhelming favourite to even up the aggregate scoring.

Sattibayev stood firm from the outset, cutting an imposing figure in the centre of the ring. The Astana Arlans fighter was superb at breaking up the rhythm of Veitia, and ultimately claimed the victory 49-46 across the board.

With Kazakhstan 4-2 up on aggregate with just four fights to go, there was immense pressure on Cuban lightweight Lazaro Alvarez, who topped his division's rankings after the group stages.

As a two-time International Boxing Association (AIBA) world champion, Alvarez is used to competing on the big stage, and expertly manoeuvred himself through his clash with Zakir Safiullin to win the contest by split decision.