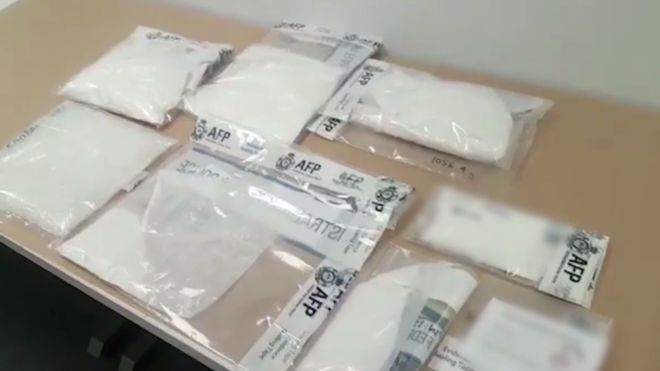 Eight people, including one Malindo Air employee, were arrested in Melbourne last week.

Malindo Air, a small airline based in Malaysia, has not commented publicly.

Police said the syndicate had illegally imported at least A$20m (£11m; $14.5m) worth of drugs, including heroin and methamphetamine, from Malaysia.

Four men and four women, all aged between 26 and 48, were charged with drug trafficking offences. Police did not state their individual nationalities.

"These couriers were entering Australia predominantly through Melbourne and Sydney."

Police later clarified that only one flight attendant had been charged.

It is alleged that he carried the drugs on his body and in his luggage.

"Airline staff are not above the law. They are subject to intervention at the border like everyone else," said a representative from the Australian Border Force

The eight people arrested will face a court in Melbourne in May. Malindo Air has been contacted for comment.