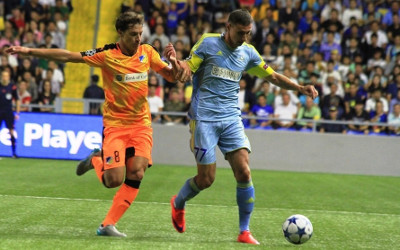 Astana are on the brink of becoming the first Kazakh club to progress to the UEFA Champions League group stage after Baurzhan Dzholchiyev's superb 14th-minute header earned a narrow first-leg advantage against APOEL in their play-off tie, said UEFA in a release on August 18.

Stanimir Stoilov's charges withstood a barrage of second-half pressure to clinch a famous victory after Foxi Kéthévoama's cross was expertly guided into the top corner by Dzholchiyev.

Debutants Astana immediately established a foothold in the game and almost took the lead inside four minutes. Dzholchiyev burst down the right and hooked in an early cross which Tanat Nuserbayev nodded straight at APOEL goalkeeper Boy Waterman. Three minutes later, the hosts went close again via Georgy Zhukov's effort from distance.

After threatening to take the lead twice, the Blue and Yellows succeeded at the third time of asking. The impressive Kéthévoama was allowed to advance unchallenged down the left before his cross found Dzholchiyev who beat the Dutch custodian with a powerful header. APOEL, attempting to secure a fourth group stage appearance, responded immediately as Tomás De Vincenti sent his near-post header narrowly wide of the left-hand upright.

George Efrem dragged a shot wide for the Cypriot champions before Dzholchiyev passed up a glorious opening to double the advantage, firing straight at Waterman from close range following a lofted ball into the box.

The Thrylos emerged for the second half galvanised and nearly levelled when Iñaki Astiz squandered a clear opportunity in the 55th minute, blazing over with only Nenad Erić to beat after Efrem had forced a fine stop from the 33-year-old home goalkeeper.

Backs-to-the-wall defending was required by Kazakhstan's title holders in the closing stages, although a rare Astana foray nearly brought the second goal as Kéthévoama's dipping effort from distance was tipped over by Waterman. Yet Domingos Paciência's men were unable to restore parity as the Kazakh team secured a famous win.