Indian Prime Minister Narendra Modi's suit, decorated with his own name, has been severely criticised on social media after reports said it cost nearly 1m rupees ($16,000; £10,000).

Mr Modi was photographed wearing the suit at his meeting with US President Barack Obama in Delhi recently, bbc reports.

From a distance, it appeared to be a classic navy blue pinstripe design.

But closer inspection revealed the stripes were actually tiny letters spelling out his name again and again.

Critics have accused him of being "self-obsessed" and "narcissistic" and his name suit a "gimmick" and many have expressed their displeasure on Twitter.

A blog in The Times of India called him "narcissistic", another onFirstpost.com said the prime minister "who always reminds voters he is a simple sevak [servant] is looking very regal". 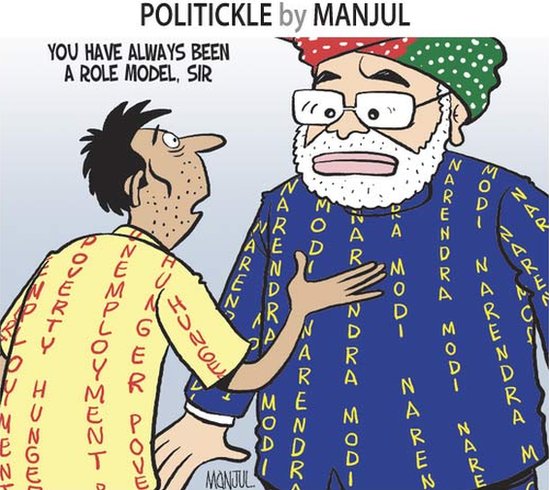 Strategic thinker, author and commentator Brahma Chellaney described it as "a narcissistic suit":

Columnist Brown Sahiba said criticising the suit was not "elitist":

Author Krishan Pratap Singh questioned the money spent on the suit while poor farmers were killing themselves:

Mr Modi's suit did, however, get a few positive comments with digital expert Tinu Cherian Abraham saying he found it "cool":

Mr Modi was snapped in the suit during meetings with President Obama during his three-day state visit to India on Sunday.

He is not the first high-profile figure to opt for the pattern - in March 2011 former Egyptian President Hosni Mubarak was photographed in a similar suit.